The theory of gravitation – of Andrzej Struski confirmed by an accidental experiment in cosmos by means of the use of an ordinary nut.

“On the 25th of June 1985 on the orbital station Salut 7  W³adimir D¿anibekow was taking the load send from Earth. The space-vehicle Progress by means of which the things were sent to the cosmic station had very simple fastenings of the load.” 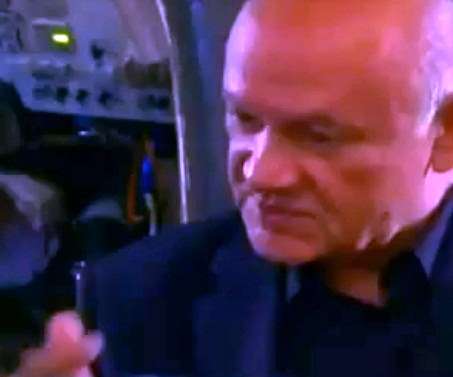 These are commonly known and unfailing “butterfly nuts”, which are very often used in the workshops all over the world. During the unloading  D¿anibekow used a quick way to unscrew the “butterfly nut”, that is he hit with his finger one of its wings, what caused an instant movement of the nut.

At a certain moment the revolving butterfly nut  released itself from the threaded rod and it started an independent flight in the cabin of Salut 7. And then the surprised cosmonaut noticed that something very strange was happening.

- The nut after it had flown several dozen centimeters made a sudden turn of 180 degrees and then it continued its flight. The cycle repeated itself after it flew over the next fragment of  the space! -said the cosmonaut.

SCIENCE IN A BLIND ALLEY

GRAVITATION A SECONDARY FIELD OF MAGNETISM

My theory in which I indicate gravitation as one of the symptoms of the magnetic phenomena is to say the least “taken with a pinch of salt”. This theory is the first one and probably the only one in the world which unequivocally  indicates magnetism as the mother of gravitation.

Fate has sent me recently the proofs that confirm my thesis. These are two Internet publications

which illustrate two fundamental factors in the process of the origination of gravitation.

Both pieces of information appeared in the Internet at the same time although there is a difference of several dozen years in the time of coming into being of the things which they indicate. The first piece of information that appeared in the Internet spoke about an accidental experiment in  the cosmic space. The picture in the film and the description present successive experiments of    the Russian cosmonaut who was at the cosmic station. As a consequence of the analysis of these experiments one may draw specific and very significant conclusions. They are of great value for  the confirmation of my theory that speaks about the origination of gravitation in the spatial magnetic field of the universe.

This experiment illustrates the magnetic environment that exists beyond the strong field of gravitation of the objects of condensed matter (stars, planets and all the other whirling bodies) which move in the cosmic space. According to my theory of the origination of gravitation there are two factors which are necessary for the initiation of this magnetic process. The first one is the existence of the magnetic spatial environment in the cosmic space. Such a magnetic environment which is characterised by a regularly arranged spatial net of regular magnetic fields in the whole cosmic space. Such fields are determined by the geometrical form that results from the shape of regular tetrahedron.

THE EXPERIMENT WITH THE NUT IN THE COSMIC SPACE REVEALS SUCH A REGULARLY ARRANGED SPATIAL NET OF MAGNETIC FIELDS.

In the film one can see a specific behaviour of the butterfly nut which set into the linear motion additionally whirls around the axis. The nut which is moving in a linear way in regular time intervals, and when it covers the same distance, changes its position of 180 degrees and at the same time it does not change the direction of its course. Such a change of the position is identical as the change of the position of the object which changes its magnetic poles or it is subjected to such changes.

THE EXPERIMENT SHOWS THE OBJECT OF CONDENSED MATTER (THE SCREW OF A TYPE OF A BUTTERFLY-NUT) WHICH CHANGES ITS POSITION IN SUCH A WAY AS IF IT WAS UNDER THE INFLUENCE OF A MAGNETIC FIELD OF A VARIABLE POLE.            THE PHYSICAL FEATURES OF THIS MAGNETIC FIELD ARE CHARACTERISED BY A REGULAR ARRANGEMENT OF THE POLES ALTERNATELY PLUS AND MINUS IN              THE COSMIC SPACE.

According to my theory that refers to the induction of gravitation for a whirling object it is necessary that such a spatial net of magnetic fields exists around it. The experiment on  the Russian cosmic station reveals the existence of such a spatial set of magnetic fields. The set of magnetic fields which were known to me before which I had recognised as a physical feature of the cosmic space in the course of a logical estimation of the effects and the causes ( my process of the logical estimation of the events consists in finding the causes for the noticeable effects) in the process of the construction of the universe.

Summing up the matter of the cosmic space I am glad that I have obtained the proof of the reality of one of the aspects of my theory that refers to gravitation. The second aspect refers to the object which has its own gravitation and it refers to the physical structure of matter of which this object is constructed.

What succours me here is the information that speaks about the results of the study of the physical environment in the surroundings of the earthquake in Japan that occurred on the 11th of March. This information speaks about a local change in the potential of gravitation, this change – the weakening of gravitation occurred in relation to the local destruction of the Earth's crust.

“The changes in gravitation

The GRACE Satellites (Gravity Recovery and Climate Experiment) detected that the earthquake changed gravitation in the area that was the most affected by it.

The earthquake “weakened” the Earth's crust and caused a small reduction in the gravitational field.”- the publication quoted from the news.

The conclusion that follows from such information is the proof of the fact that the condensed matter  here in the form of the planet's crust has an influence on the state of gravitation. The change of the physical state in the structure of such a crust – matter caused the change of gravitation in the area of its occurrence. In other words, the physical character of the structure of matter has an active influence on the current state of the gravitational field that is being generated.

According to my theory that refers to the induction of gravitation one of the factors in its creation is the matter of the object. The magnetic fields of each physical formation which comprises the matter of the object during the movement in the cosmic space permeate the net of regularly arranged magnetic fields. Such a permeation induces  the origination of the magnetic potential which summing up creates additional magnetic force that is gathered in the areas of the induction. It is the force of the gravitational sequence. Its potential depends on the density of matter and the speed of the movement of its particles together with their own magnetic fields through the spatial net of the magnetic fields of cosmos.

16.03.2012r.  All Rights Reserved. Copying, distribution only by the permission of the author of the text and giving the link to the official site of the authors.